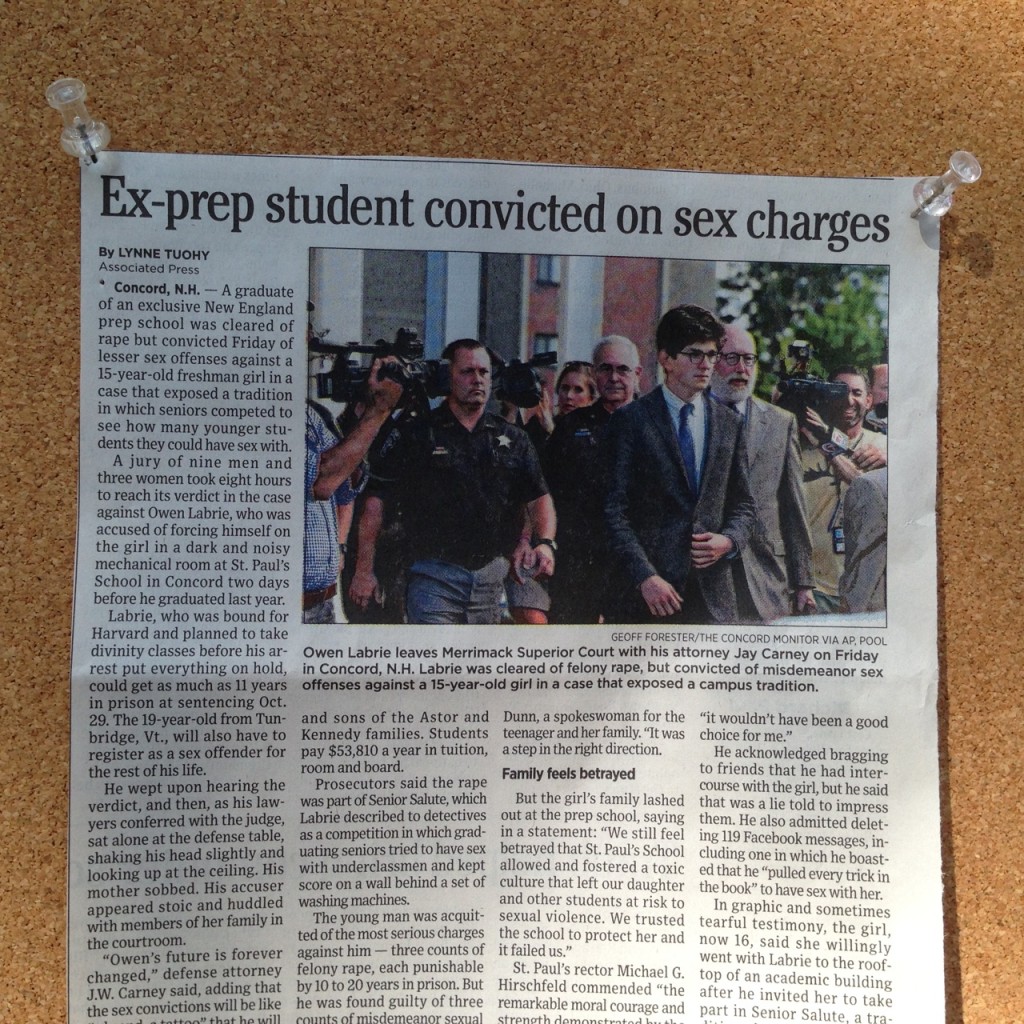 The recent sexual assault case at a New Hampshire prep school is a tragedy for both teens involved (and their families). But it does give other parents an opportunity to talk with their kids about situations and choices that can cause legal and emotional trouble—and about how to avoid decisions that have long-term repercussions.

In the case, a then-18-year-old senior at an elite boarding school was charged with sexually assaulting a 15-year-old student. He was reportedly engaged in a bragging-rights competition with other seniors to see how many underclassmen they could have sex with. The girl said she went willingly with the guy, thinking they’d just kiss, and apparently things went beyond that. It’s unclear exactly what happened and the extent to which the girl objected. The young man was acquitted of felony rape, but found guilty of several lesser offenses. He may spend as much as 11 years in prison and will have to register as a sex offender for the rest of his life. Two young lives have been changed forever.

There are a number of themes here that are important for parents to talk about.

Statutory rape. High school students tend to think of other high school students as fair game for dating and sex, but in the eyes of the law, that’s not always so. Even when sex between teens is consensual, it is illegal if the younger party is below the age of consent or is significantly younger (in my state, 3 years younger) than the older party. Even long-term dating relationships between, say, a senior and a freshman sometimes blow up later, or a bystander may report the relationship to the police. Sometimes, people aren’t even honest about their age. State laws differ, but it is very important for parents to learn the laws in their own state and make sure their children know them. Statutory rape is considered a sex crime, and it can have devastating consequences for a young person.

Competition for “conquests.” In the New Hampshire case, senior boys at the school apparently competed to see who could bed the most underclassmen. Unfortunately, this sort of thing happens in every kind of school, sometimes (as in this case) as part of a “tradition,” and other times just for boasting rights in the locker room. The boasting may or may not be true, but it happens all the time.

If you’re the parent of a daughter: Explain to her that guys sometimes try to sleep with girls just to impress other guys. Does she want to be just another notch on someone’s bedpost? If the guy who’s pursuing her is older and/or “cooler,” she should be especially careful. If any guy is truly interested in her as a person, he’ll spend time getting to know her and won’t push her to have sex quickly.

Make sure she knows that she has the right to say No—at any time, under any circumstance, whenever she feels uncomfortable. If the person she’s with doesn’t seem to be taking her No seriously, she should get louder and angrier and do whatever she can to get away. If he sexually assaults her anyway, it’s not her fault for not protesting enough. But most guys will back off if the No is loud and clear. (Also true: If she wants to say Yes to a sexual activity, she should be sure she means it. Regretting her choice later does not give her the right to accuse the other person of wrongdoing—false accusations are also a crime.)

If you’re the parent of a son: Make sure he’s really clear about statutory rape laws in your state. It’s not creepy for a 19-year-old to sleep with a 16-year-old, but it may be illegal, and the legal consequences can be devastating.

Talk with him about the pressure on guys to show that they’re “real men” or “cool” or whatever by having multiple sexual partners. Does that sort of competition happen at his school? Does he know that a lot of guys are lying about how many partners they’ve had? How does he feel about treating girls as nothing more than a number? about kissing and telling? How would he feel if someone treated his sister or friend that way? How does he think an honorable man would handle these situations? What kinds of choices does he want to make? Your son may not have answers for these questions, but it’s important that he be thinking about them.