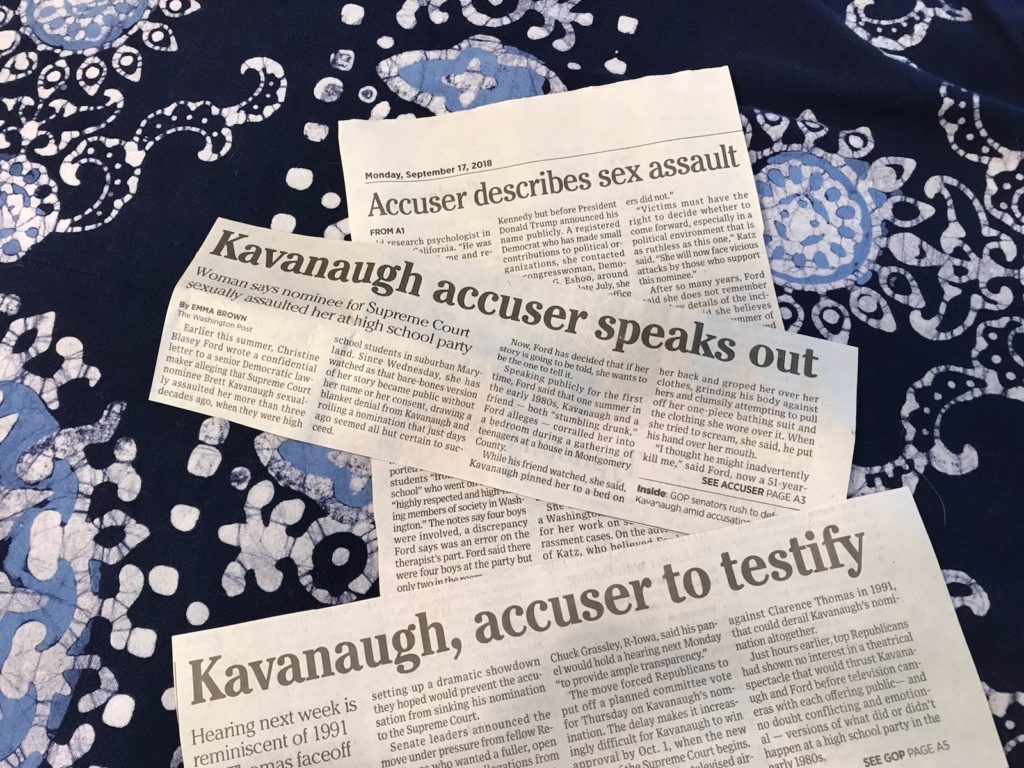 Whatever your views on the nomination of Brett Kavanaugh to the Supreme Court and the recent accusations against him, one thing is certain: It’s an excellent opportunity for a conversation with your teen about sex and consent.

Some teens may be aware of the headlines; others may be oblivious. If your teen hasn’t mentioned anything about the Kavanaugh situation, ask what they already know. If they don’t know about the accusations made against him by a woman he knew in high school, have them read an article or two outlining her claims.

Do your best to keep your political views out of this discussion and focus on what Christine Blasey Ford says happened. Whatever you believe about this particular case, it’s an example of the kinds of sexual assaults that happen between teens every day—and you don’t want your kid to be involved in any part of one.

From News to Conversation

Here’s how to discuss the news with your teen:

Start with context. “I don’t know how much you know about what’s been in the news lately, but it seems like a good opportunity for us to go over sexual consent.” (You’ve now raised an important sex-related topic in a natural, non-weird way.) Listen to what your teen already knows about the accusations against Kavanaugh; provide articles if they haven’t already read them.

Review consent.  Ask what they’ve learned about sexual consent in general. Their school health program may have done a great job covering consent or may not have mentioned it at all. Their friends may or may not talk about it; they may or may not have read articles and discussions online.

Then ask how they think consent applies to the accusations being made. You’ll learn what they know—and show that you’re prepared to listen to them. Teens are much more likely to stay engaged in conversations that are dialogues, not lectures.

Then, either agree with their assessment or add to it. At a minimum, teens should know that consent to any sexual activity should be clear, mutual, and not coerced.

Make sure kids of any gender understand that attempting to persuade someone to have sex may or may not rise to the level of coercion—but physical force is never okay. It is never okay to hold someone down or cover their mouth to keep them from screaming. It is never okay to lock someone in a room or try to prevent them from leaving. Yes, this should go without saying…but say it anyway.

Explain why this is a big deal. People who commit sexual assault tend to minimize it, especially if it didn’t result in penetration or if the encounter started off consensually. “Things just got a little out of hand”; “I hardly remember it”; “It was just teen stuff, no big deal.”

As a therapist, let me assure you that for the person assaulted, it is a very, very big deal. Victims’ trauma resonates for decades. Even when they try to ignore what happened to them, the experience often undermines their ability to trust, their sense of self, their feeling of safety in the world, and their later romantic relationships. It’s possible to heal from sexual assault and have a good life, but the emotional scars remain. Do not ever minimize the impact sexual assault can have.

Talk about the role of alcohol. Ford says Kavanaugh was “stumbling drunk.” Ask your teen whether they think being drunk would make someone less responsible for their behavior.

I feel strongly about this: Drunkenness is no excuse. If someone “stumbling drunk” randomly punched you in the face and broke your nose, would you be just fine with it? Of course not; it’s still assault. Everyone is responsible for staying enough in control of themselves that they don’t harm other people.

Teens really shouldn’t drink at all, because alcohol is so bad for their developing brains. But if they do, they should learn what level of “happy buzz” makes them relaxed but not out of control. Staying sober, or at least not too drunk, makes them much less likely to become a victim or perpetrator of assault.

Make your views on sexual assault clear. Teens can be impulsive; situations can be murky. Their emotions may override their rational mind. So it can be very helpful if part of what’s in their heads in fraught moments is a crystal-clear statement from parents. Maybe something like:

“I would be devastated if you ever forced someone to do something they didn’t want to do.”

“Forcing someone to do something is wrong.”

“Strong people have a responsibility to protect vulnerable people and should never take advantage of them.”

“I know you’re not the kind of person who would force yourself on someone.”

These sorts of statements get teens thinking about the kind of person they want to be and help them internalize a sense of themselves as respectful. They may not always follow their better angels—but at least the angels will be part of their internal dialogue.

Tell them to come to you if anything bad happens. Victims and witnesses are often afraid to come forward after a sexual assault. The fear of being disbelieved or punished causes many people to struggle alone at a time when what they really need is love and support.

Young people today are more aware than my generation was that everyone should consent to any sexual activity, and the #MeToo movement has heightened awareness about sexual harassment. Still, teens may be hesitant to tell adults about a sexual assault, especially if they’ve been drinking (as they usually are) and are afraid of getting in trouble. They may also worry if the assault happened while they were making out with the person who later wouldn’t stop.

That’s why it’s so important for parents to be on the record that “If anything bad happens, tell me, and I won’t be mad.” The negative effects of any sexual trauma are magnified if the victim is disbelieved or feels they have no one they can turn to. Be there for your child.

Side note: Any victim of sexual assault should get to decide whether to report it to the authorities. You can express your opinion, but it’s important for the person who’s been assaulted to have control over that decision. Forcing them just piles an emotional assault onto the physical one. What’s important is that you be there with love and care, whatever they decide.

Encourage an ongoing conversation. Tell your teen you think all this is very important and you know it can be complicated. Say that you’d like to be a resource if they or a friend ever has questions or concerns about consent or sexual violence or anything else. Hopefully they’ll never need to turn to you…but if something awful does happen, at least you can get through it together.